Learn the moves to latest hits from all around the world! Hip Hop is a kind of dance that is evolved from a mix of jazz, rock, tap, and American and Latino cultures. ­The hip-hop culture is influenced by the following four elements: disc jockeys, graffiti (art), MCs (rappers), and B-boys and B-girls.

Jazz, one of the most “IN” dance style, gained its popularity due to performances on the television, music videos, and commercials. People enjoy Jazz as it’s highly energetic and fun. 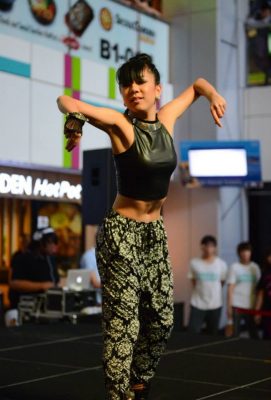 Starting at a tender age of 4, Claudine has never stopped dancing since, and have gone on to acquire training in ballet, jazz, Chinese dance, contemporary, musical theatre, hip hop and other street styles. Having just completed a scholarship in 2016 with the esteemed Debbie Reynolds Dance Studio in Los Angeles, she is now currently working on establishing her career as a professional performer and choreographer. Known for her versatility and passion, Claudine’s dance style is strong yet fluid, explosive yet controlled, with much emphasis on intention and movement quality.

Having worked and danced over the years with choreographers from USA, Japan, Australia and Singapore’s very best, it has blessed her with many opportunities to be on a global stage. Her credits include choreographing and dancing for local artist, Shigga Shay, in his live performance of Rock My World with The Sam Willows and Grizzle Grind Anthem video, Asia’s Got Talent (2015), Under Armour Trade Show (2016), 27th SEA Games (2013), etc. On the competitive front, Claudine has also gone on to bag achievements individually and with her all-girl crew, G’De Rellas, such as coming in Champion of All Babes Cineleisure Dance Battle (2013), 1st Runner up at The Royal Dance Off Chapter 4 (2014), Top 13 at Ladies Night All Styles Freestyle Battle (2014), Top 10 at All Babes Cineleisure Solo Dance Battle (2013), and Top 8 at Super24 (2014).

This course is targeted at those who wish to dance but don’t know where to start. The focus of Groove (Beginner) is not so much on performing choreography but confidence in self-expression, rhythm and musicality, as well as body and spatial awareness. Basic grooves of all styles (hiphop, dancehall, salsa, etc.) will be shared, broken down and supplemented with short exercises to practice. Since you will grooving throughout the entire class, you can expect a slight cardio workout too! But not to worry, the pace of the class will be determined by the level of the students!

Intermediate Groove is for those who feel comfortable to be challenged in their creative self-expression. The same elements of Beginner Groove class are maintained but the focus is on how to integrate these grooves with flow, texture and musicality within a short routine or choreography. You may also occasionally expect elements of freestyle introduced where you will be allowed to explore body movement beyond choreography.

Val is a dance instructor with over 10 years of experience & teaches dance courses to Preschool to Tertiary students. She has taught hip-hop, street jazz, ethnic dance fusion, tambourine dancer and jazz in various schools. She has also choreographed for Danceworks competitions from 2012-2014. In 2013, one of her students won the best Dancer award for Dancworks. Val auditioned & performed for Got to Move 2015 under Kinjaz for the and performed as a Guest for Recognize studio Recital under Overseas Dance Instructors, Pat Cruz & Vinh. She was the assistant choreographer for the 2014 Chingay parade. Val has been performing with Oschool Recital since 2008 and was also the main choreographer for her Polytechnic dance club. Valerie’s most recent gig was performing at the Youth Olympic Games Opening & Closing Ceremony & Opening Ceremony for 28th Sea Games Singapore 2015.

In this kids class, they will learn and understand the basic groove & understanding the rhythm (Timing) by learning how to count with the music. Know about space awareness, developing their confidence for expression & creativity.

Training them in listening to simple instructions & other non-verbal by infusing some game activities for them to play and dance at the same time. This is to allow the kids to be free in expressing themselves through different movements with no restrictions to it.

All the techniques covered in class will be combined and choreographed into a short routine for students to learn with some elements of simple basic hip-hop techniques.

They will also be exposed to cardio movements to train and build their muscular strength & cardiovascular endurance, followed by dynamic stretching. After that will be focusing on Isolation (head, shoulders, chest & hips) follow by introducing down & up bounce rhythm & groove variations for the kids to learn and practice. The techniques will be broken down step by step in class so that the kids will be able to grasp and understand at their own pace. Basic hip-hop techniques such as LA Walk, LA Turn, Cabbage Patch, Harlem Shake, kick & step & pony will be taught in the class.

Finally, the students will learn a set of dance choreography which include the different hip-hop elements that they have learnt from each session from popular songs & get the kids to learn how to freestyle to music.

Ogus started his passion for dance in 2001. Deciding to pursue his love for dance, he became actively involved in Ngee Ann Polytechnic’s dance club, New Revolving Age (NRA). Taking up the role of a Vice-President in the club under the tutelage of Ms Ann Tan, he led his committee through a tough year of competitions and performances including co-managing Danzation 2008. His journey in NRA has taught him valuable lessons on handling people and further enticed him into dedicating himself to educate future generations. He later took up the job of an Alumni Instructor to the club and has since touched the lives of many of his students.

Ogus first joined BOTS in clinching champion for Dance Free Competition, 2nd Runner-up for Suntec 2011 and 6th Place for World Supremacy Battlegrounds 2011, which is the biggest and most prestigious international street dance competition in the Southern Hemisphere. His team later collaborated with Freekzy Nutz to form FreekzyBOTS and went on to attain 2nd Runner-up for Singapore Dance Delight 2013 and 2014.

In 2013, Ogus joined NRA Legacy in a local dance competition Super24 and emerged as champions earning them prestigious recognition from dancers island-wide. Later in 2014, he set up a dance company, Legacy Dance Co. together with 2 crewmates. The vision of the company was to provide a learning platform to groom younger generations of dancers and this was kept in line with the knowledge they learnt from their years spent in NRA.

As a Choreographer, Ogus focuses on the emotional aspect of his dancers and create pieces that have been favored by many. Some of his favorite routines include TheOutrage; The Carnival Act, Battlescars; Danzation 2012 and both routines from his DanzPeople Recital 2013 and 2014. Commercially, Ogus have danced for various local and international artistes like Derrick Hoh, Stacy Angie, Taufik Batisah and Julie Tan. He is also the choreographer for the first Singapore Idol, Taufik Batisah on his various tracks including his latest hit, Awakkatmane.

Hip Hop (7 – 10 years old)
Introduction to Hip Hop focuses on basics and foundations of the hip hop syllabus. Students who attend the class can expect to learn a variety of hip hop vocabularies and possible variations of the same vocabularies. Coordination is key to the foundation of dance and that will be the focus for the classes.

Beginner Hip Hop focuses on combining hip hop vocabularies with body awarenesses like basic isolations into choreographies. The class would always end with a beginner level choreography that students might find it hard to catch at first but gain satisfaction upon being able to execute the moves. Focus of the class is on application of techniques.

Hip Hop (15 and above)
Beginner Urban class focuses on textures and variations in energy. Students will be learning the ways to execute movements with varied energy hence creating dynamic visual movements. Most of the classes will be held with the direction of learning choreographies and students can expect to be dancing to the latest pop music or music trends.

Having over 15 years of training in ballet, Sarah went on to train under Low Mei Yoke in contemporary dance, and entered LADC’s year-long dance scholarshop programme where she trained with Lionel Araya in hip hop, jazz, and salsa. She eventually moved on to studying Lindy Hop and the Charleston under Sinclair Ang, and is currently exploring other social dances. She most recently attended NYU’s musical theatre intensive, and dance residency programme, where she worked with David Dorfman Dance and The Dash Ensemble.

With such a broad spectrum of dance genres under her belt, Sarah is both a versatile and technical dancer, with years of experience performing on stage at major events such as Chingay, Youth Olympic Games, and various events at the Esplanade. She has worked with major chorepgrahers in Singapore’s dance scene such as Jeffrey Tan, Ryan Tan, and Andy Cai. Her most recent work includes TRDO Dancers in Suits (by Jeffrey Tan) and Getai: The Musical (by Andy Cai). She has also ventured into the world of television, having come in as one of the Top 8 finalists with her group The Glamourettes on the dance competition The Dance Floor, which aired on national television.

Sarah is now a contemporary and jazz instructor, specializing in teaching young adults, youth, and children. She has led the many schools she has taught to several victories, where they have been consistently awarded Gold and Silver awards at the biannual National dance competition for schools, the Singapore Youth Festival. She has also choreographed for tertiary educational institutions such as NTU Contemporary Dance, and ITE Cemta.

This class brings an urban element to Jazz, emphasizing groove and personal style while still keeping true to jazz lines. This class is perfect for those who want a more “MTV” feel while still focusing on their jazz technique.

Broadway Jazz
Do you love musicals? Have you always dreamed of being on that stage? Then this class is for you! Based on Jazz technique, this class focuses on story telling and body expression, challenging the more seasoned dancer.

Jazz (beginner kids)
This class is suitable for children 7-12 years old who want the space to work on jazz techniques and how to apply them in fun and challenging routines. With a new routine each week, there’s no need to worry about falling behind – and as a kids only class, there’s no need to feel shy!